The first meeting took place on 11/1/75 in what was called ‘Buds Tavern’ in the main grandstand at the Oval, with a second meeting quickly following on three days later. Jim Mc Allister was elected as chairman and Angus Livingstone was elected as secretary.

The sole aim of the new club was to follow and support the Glentoran team, home and away, in as many games as possible. The dream was to provide vocal backing in far off places throughout Europe. This was following on from previous European trips to Benfica, Waterford and Bergen that members of the Parkview had undertaken.

The club began to grow in strength and in the summer of 1975, an upstairs room of a laundrette at 90a Mount Street at the corner of the Woodstock Road was rented to enable the members to form a clubroom and a base. From here the club started taking buses to all Glentoran ‘away’ games even some ‘friendlies’ and some 36 years later the Club continues to run a bus to all Glentoran away games. This season will see the club run it’s 900th bus to an ‘away’ game.

From the Mount Street premises, 12 members travelled to Basle in Switzerland in season 76/77. So impressed at the vocal support the team received that night, the then chairman Johnston Nelson donated £50.00 cash towards the supporters’ kitty.

During the Season 77/78, the club tried to arrange a plane to go out to Juventus but could only fill 39 out of 75 seats and so the trip was cancelled.

The club continued to flourish in the Mount Street premises and soon a full drinks license was obtained. This was quickly followed by the club taking over the tenancy of the downstairs of the laundrette. Pool and darts games were played regularly here with other Glentoran Supporters clubs. This was mainly with the Old Glentoran Amalgamation League when nearly all Glentoran clubs played each other both home and away.

The Ballymac was going well at the start of the eighties with a membership of over 30 active members. In September 1981, two double decker buses left the Mount Street premises on route to the Liverpool Ferry terminal carrying over 120 Glentoran Supporters on their way to see Progress Neidercorn in Luxemberg in a European Cup game. This was the start of the European adventures for which the 80’s and 90’s were famous for in the Glentoran supporters’ circle.

In early 1983, the club premises were vested by the Government, along with the entire area of the lower Woodstock Road, as redevelopment was taking place. The club decided to leave the Mount Street premises and used ‘The Blue Bar’ at John Longs Corner at the bottom of the Castlereagh Road for several months until something more permanent was arranged.

At this time the ‘Oval Club’ in the football ground itself closed. So after several meetings with the directors and club officials it was agreed that the ‘Ballymac’ would take over the running of the old ‘Oval Club’.

A deal to pay over £20,000.00 per year was agreed (but as time went on, it proved impossible to keep this agreement). The ‘Ballymac’ moved in and redecorated the ‘Oval Club’ in the summer of 1983. John Crossen, the then chairman of Glentoran Football Club opened the main function room on 30/7/83.

The ‘Ballymac’s time at the Oval Club (approximately 10 years) coincided with the most successful period in the club history with 6 Irish Cup wins and 3 Irish League titles gained as well as numerous other trophies.

The Chairmen during the club time at the Oval were Jim Mc Allister, Roy Miller and the late Jackie Mc Causland.

The club was again very active in helping players during Benefit Seasons etc and contributing to charities in the local area. The club continued to keep a membership of over 30 members and to run buses to all ‘away’ games.

In the summer of 1994 with the Glentoran team going through a poor patch and crowds dropping, it became apparent that the club was going to be unable to keep it’s rent agreement with the Glentoran club and so the decision was made to leave and relocate to new premises.

The club went back to its roots and started meeting in the Parkview Bar for its Monday night meetings. At one meeting in late 1994, the members agreed to look at new premises in Wilgar Street. The Strandtown Band which owned the premises had ceased. The members agreed to pay £5.00 each per week in dues so as to allow the club to apply for a mortgage to buy the new premises.

The ‘Ballymac’ first opened it’s doors on 26/12/96 at Wilgar Street and then on the 3/5/97, William Taylor, the owner of the Parkview Bar officially opened the new clubrooms.

A new full drinks license was obtained and the club began to flourish. The upstairs lounge was soon refurbished and named after past members.

Ted Brownlee, the then Chairman of Glentoran Football Team, officially opened The Past Members Lounge on 27/11/98. The room was decorated with all sorts of Glentoran memorabilia, from shirts and scarfs to photos and pennants and proved very popular for other Glentoran fans to come and have a look at.

During the Season 2010 / 2011, and for the first time in 25 years, no members of the club travelled to Iceland. This was mainly due to the price and due to short notice given by U.E.F.A for the match to take place.

This season 2010/2011 saw eleven members travel to Macedonia and even two members made it to the second round match in Ukraine. A common joke inside the club is the number of away European appearances that members have made over the years. We now have members who have reached twenty plus European appearances.

After several years of settling into Wilgar Street, the members agreed to upgrade the downstairs of the club, (removing all traces of blue in the process). A revamp, costing over £40,000.00 was completed and on 25/10/2003, Paul Leeman along with Gary Smith opened the newly refurbished downstairs lounge.

The members are very proud of our collection of over 40 players shirts from Cup Final etc which hang on the walls of the downstairs lounge. These shirts all have a name on each one and arouse a great interest to new visitors. They are a must see for all Glentoran fans.

Every year the members agree to help out a local charity. This has resulted in over £20,000.00 being raised for good causes since moving to Wilgar Street. Last year Friends of Cancer received £1,425.00 and this year we hope to raise at least £1,000.00 for Huntington Disease. This was a charity nominated to the club by Paul Leeman, who is the current president and a full member of the club.

The Ballymac is also very proud of it’s annual Player of the Year and Young Player of the Year awards. Every year, a four course meal is arranged for this special night and the team manager and players are invited to attend with all club members and guests.

This year Colin Nixon was the club’s Player of the Year and David Howland was the Young Player of the Year. The Ballymac also present The Jim Campbell Merit award to someone in the Glentoran circle who has given outstanding service to the club.

To date the ‘Ballymac’ has produced two lapel badges. The first was a small shield produced in the early eighties. The second badge was produced in 2001 to celebrate the club’s 25 years in existence. Both can still be obtained from the club if anyone is interested.

At present the ‘Ballymac’ has twenty five full active members, all of who help out with bar rotas and door duties. No member of the club gets paid for any work but the club does help towards member’s European travel expenses. The club will always welcome interest from supporters who would like to join. Anyone thinking of joining is encouraged primarily to travel on ‘away’ buses. In the last two years the club has had some memorable days playing pool and darts against fellow Glentoran clubs, namely, 1st Newtownards Freelance, Carryduff, Fred Roberts, 1st East Belfast. This has increased the great harmony between local clubs and we at the ‘Ballymac’ hope that this will continue and should any other Glentoran Club wish to get involved, please contact any member.

After 36 years the Ballymac remains very strong as we look forward to our 40th year – and maybe a new badge as well!! 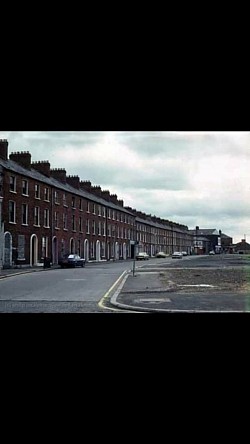